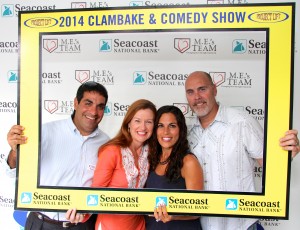 Project LIFT made big strides this year, gaining the attention of several new corporate partners and beefing up its board of directors to further awareness within the community of the successes the Project’s had in rehabilitating Martin County’s at risk youth.

This year, the Clam Bake was at the Flagler Center in downtown Stuart, with live music and a hilarious comedy show to thank  patrons for their support as they feasted on fresh seafood while overlooking the St. Lucie River.

In the last 4 years, Project LIFT has proven its model for keeping kids clean works!  While most substance abuse rehabilitation programs struggle to maintain a 15% success rate, Project LIFT’s success rate has continued to hover at 85% year over year!  85% of the kids participating in this program stay off of drugs and become productive members of society.  Board President, RJ Ferraro believes this is due in large part to the trust that Executive Director Bob Zaccheo builds with these kids.  “Bob hand selects the toughest kids in the community, almost always directly from the juvenile justice system.  These are the kids that are using and selling drugs, and breaking into our houses and cars,” said Ferraro.  “He and his staff lead by example, and show the kids that there is another way to live life.”

The Program has at least 3 components that Ferraro and Zaccheo believe explain the sky high success rates.  First, the kids learn trust and a sense of family.  Many of them have had no family or limited family leadership and discipline.  Every day at the Project includes a family style meal where the participants sit down for dinner with the staff to talk, eat and build trust.

Second, the kids learn vocational skills.  Through the Project’s incredible staff and volunteers, the kids learn carpentry, boat building, auto mechanics and screen printing to name a few.  This gives the kids the confidence they need to succeed in life, and it’s an excellent opportunity for the therapists to get further into their heads.  While most teenage boys will never open up to a therapist while lying on a couch in the traditional therapist’s setting, most start talking without being prompted when turning a wrench or striking a nail along side of their therapist.  Rather than pay to be there, the kids receive a paycheck for their work.  It’s not much, but that’s the point!  Most of these kids have never earned anything and prior to joining the Project most received some sort of government subsidy to get by.  These kids feel the power of the pay check in their pocket, and it’s contagious.  They want more and know that they can get more by working more.  It starts what Zaccheo has often referred to as the paradigm shift, turning these kids from takers to givers.  From tax dollar spenders to tax dollar payors.

The Third element is the give back.  This is the pinnacle of the paradigm shift.  These kids will work on a car donated to the Project and get it into a road ready condition.  They will then select amongst themselves from a handful of applicants or candidates to get the car at no cost.  Most of these families come through Safe Space or some other charity that has identified them as a family in need.  Most of the kids could use the car themselves.  So could someone they know.  But it’s not about that.  It’s about giving back to the community.  When the kids realize that it is real people helping other real people within the community, the light bulb goes off.  They are ready for the real world where work is appreciated, and charity is necessary for those in real need – not to give a handout, but a hand up.

Project Lift is now serving more teenage kids with substance abuse than any other rehab in the community.

For more information or to get involved in Project Lift, visit the Facebook Page or the website.