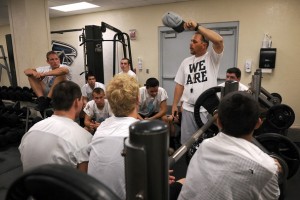 Jensen Beach High School Head Football Coach John Fey has announced his resignation from coaching effective immediately. He also stepped down as Dean of Students. The resignation comes before the Falcons’ home opener against Forest Hill High School. “In an attempt to motivate our team to play with more mental and physical toughness, I used inappropriate language,” said Fey. “The message I was trying to convey was lost in my poor choice of words. My passion got the best of me. I know that by virtue of our leadership capacity, coaches are traditionally held to a high moral standard within the community and I accept responsibility for my behavior.”

A Martin County native, Fey began his coaching career with Jensen Beach High School as a defensive backs coach in 2006. He was promoted to Defensive Coordinator and then to Head Coach in 2010. Fey was the longest tenured football coach at Jensen Beach High School and holds the school’s record for the most single season wins and most wins of all time. He coached the Falcons to their first playoff appearance in the 2012 season.

“I would like to thank all my players, both past and present, for giving me the opportunity to coach you. You have worked exceptionally hard for me, your teammates and yourselves. With your dedication and heart, you have helped me to leave this program in a better place than it was when I came. GO FALCONS!”