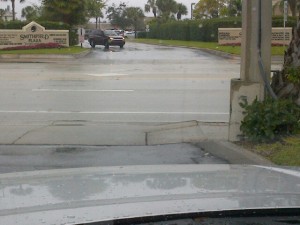 Be sure to come to a complete stop, or you are committing a traffic law violation even without a stop sign.

In case you didn’t know, it is a traffic law infraction to cross a sidewalk without stopping first with all four tires when leaving a parking lot – even if there is no stop sign.  This traffic law is a civil infraction, which means you can’t go to jail for it, but you can be fined.  And, it is a reason for an officer to pull you over and investigate whether he thinks anything fishy is going on.

Just last week here in Martin County, a local DUI and traffic law judge sentenced a man to a $500 penalty for crossing a sidewalk without stopping first. It was late at night and there was no vehicle or pedestrian traffic on the roadway or sidewalk.  In that case, the officer wrote the traffic ticket and after engaging the man, also arrested him for DUI.  His prior driving record was insignificant.  The man exercised his right to a trial by a jury of his peers on the DUI.  The jury found him Not Guilty of DUI after hearing and seeing all of the evidence.  But juries don’t decide the facts on noncriminal traffic law violations, and they never decide the penalties – that’s for the judge to do.

The $500 dollar fine that the judge imposed was the maximum sentence for that traffic law violation.  Was the maximum penalty imposed because the judge felt so strongly about drivers failing to stop at a sidewalk with no traffic in the middle of the night; or was it punishment for being found Not Guilty of a DUI by a jury of his peers?  Regardless of which reason motivated the judge to rule this way, we as citizens get to decide if this is the brand of justice we expect and want from our local judges?  Maybe it is, maybe it isn’t.  You’re turn to be the judge.  What do you think about it?