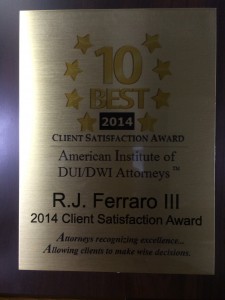 RJ Ferraro takes a custom approach to every DUI based on the facts and the client’s specific goals.

We are pleased to announce that R.J. Ferraro was voted into the Top Ten Best DUI Attorneys in the State of Florida in Client Satisfaction by the American Institute of DUI/DWI Attorneys.  RJ Ferraro has been practicing DUI Law on the Treasure Coast since 2001.  He has handled all types of DUI and BUI cases including those with breath tests, blood tests and refusals; and cases involving property damage, injury or death.

“There are a few key things that we are looking for in every DUI case, however, we treat each case differently, depending on the specific facts and the client’s individual goals,” said R.J. Ferraro.  “There is a feeling out there that if you have been arrested for DUI, there really is no defense.  Often, that’s not the case at all.”

RJ Ferraro will begin each case by reviewing the evidence to determine if there was a legal reason to stop the vehicle involved, and to determine if after that stop, there is any evidence to support the arrest.  If there is, he will review the strengths and weaknesses of the evidence with the client to determine whether or not the case could be proven beyond a reasonable doubt.  “I firmly believe that the DUI Video is the strongest evidence to sway a jury verdict,” Said Ferraro.  “Even when experts are presented for one side or the other, they usually talk in foreign tongues and are so technical that they lose most jurors in the first few minutes.  But the video is something that they can watch and decide for themselves.  Its like a legal instant replay.”

Many people do not realize that in addition to the criminal case, a refusal to blow in the machine or a breath sample above .08 will also trigger an immediate suspension of the driver’s license.  DUI laws have recently changed to permit a first time offender to obtain a hardship license for work purposes immediately upon completing certain requirements.  But this option is only available within the first 10 days following the arrest and it involves the driver waiving certain rights.  It is very important for the driver to know his or her rights before that 10 day window expires.

R.J. Ferraro offers a free consultation to review the facts of a DUI case and to advise the driver of their rights and obligations, as well as the time tables before certain rights are automatically forfeited.  If you have been arrested for DUI, or know someone who has, contact us immediately to schedule your Free Consultation.