The Florida Text and Drive Ban 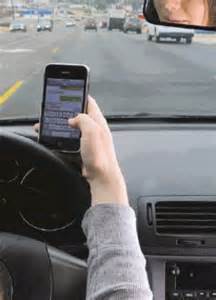 As of October 1, 2013, the Florida Texting and Driving Ban is in effect.

Since October 1, it is officially illegal to text and drive in Florida.  Sort of.  The penalties are not as stiff as they are for a Florida DUI, or even speeding.  In fact, you can’t even be pulled over if an officer sees you texting and driving.  You can only get a ticket for this infraction if you are already pulled over for something else.  The fine for a first offense for texting and driving is $30.  Really?

So, what is the point of this law?  If you are already going to pay a fine for careless driving after plowing through another driver’s tailgate, plus the cost of the tailgate, what’s a few extra dollars on top? When you can’t be pulled over for a traffic infraction, the law’s penalties are hardly a deterrent or a punishment.  Have You stopped texting and driving because of this law?

This is a perfect example of government sensing a problem, but being unable to fix it due to a combination of politics and human nature.  As a result, this law, like many on the books, will do nothing to alter behavior or alleviate the danger of texting and driving?

When deciding whether to create a new law to address a perceived problem, our State and Federal governments should first consider whether a law is necessary.  Rather than create a new law through the legislature that has no teeth, these problems might be better addressed through the enforcement of existing laws.  After all, the maximum sentence is rarely imposed in a careless driving ticket.  Law enforcement and prosecutors could request that the judges consider texting as a contributing factor to any traffic infraction in which texting is involved.  Judges could then use their discretion to increase sentences based on the facts presented.

Second, State and Federal governments should determine, if a new law is necessary, what language and penalties will fix the problem.  Arguably, texting while driving might deserve stiffer penalties than just an increased fine on another ticket.  But if that’s the case, officers should be able to pull you over to enforce the infraction.  The Florida texting and driving ban may have been drafted out of good intentions, but after going through the process of becoming a law it was gutted of all substance and, as written will do nothing to solve the problem.

The Florida texting and driving law should be repealed.  Like so many other issues that are tackled by politicians, it seems that this law is much more about form over substance.  If we truly believe that we need another law, we should hold our leaders accountable to actually draft one that will fix the problem at hand.  Otherwise, let’s use the laws we already have.